Home > Blog > Why is the Risk of Truck Accidents Greater When There's Snow and Ice?

Why is the Risk of Truck Accidents Greater When There's Snow and Ice? 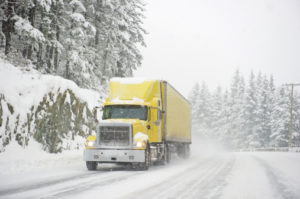 There are a lot of reasons why truck accidents are an especially big problem when there is snow. Ultimately, it is the bad decisions made by drivers that could result in crashes that could endanger motorists. If an accident occurs, you need to know what rights you have to pursue a claim for compensation. An attorney can assist you in determining if a trucker was to blame for damages.

Truck drivers often have very tight schedules they have to keep. They are expected to make deliveries on time. As a result, truckers often cannot just stop driving when the weather is bad. They typically must try to push through as much as possible so they can make their delivery when they were expected to do so.

Because of hours-of-service rules and limitations on the number of hours a trucker can drive before resting, truckers also cannot make up time later if they were to take a few hours or a day off the roads because of bad weather. All of this creates pressure to keep driving even when stopping would be safest.

The hours-of-service rules could also create another bad incentive for truck drivers. Most truck drivers carefully plan how far they have to drive in a day so they can stay on schedule. If bad weather comes and they were to slow down a lot, they might not meet their targeted miles driven for the day. Again, maximum drive time rules could prevent them from making up the time, which could mean that truckers travel at higher speeds than is safe due to the snow and ice, so they can get to their desired destination before their drive time is up.

Finally, truck drivers frequently travel for long distances, often crossing state lines and even crisscrossing the country. If a truck driver travels into Ohio from a warmer weather state which does not get as much snow or as much ice on the roads, that trucker may not be as familiar as he or she should be when it comes to driving in a safe way during bad winter weather. A truck driver inexperienced with driving in bad winter weather driving could present a significant risk to the safety of Ohio motorists if that driver tries to travel on the state's roads during a storm or when there is a lot of ice on the road.