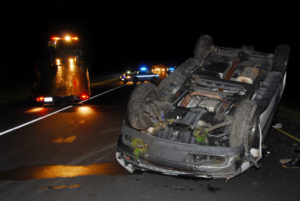 Pickups and SUVs have soared in popularity in the past few years, especially here in Ohio. They used to be the most dangerous vehicles on the road until new technology put them on par with sedans in terms of safety, which likely contributed to their rise in popularity.

However, their size makes them more likely to rollover in an accident, increasing the chance of injury or death. Only one percent of all crashes involve a rollover, but these crashes account for about one-third of passenger vehicle deaths.

Rollover accidents can happen in any vehicle, but they are much more common in pickups and SUVs. Rollovers account for over 40 percent of deaths in SUV and pickup truck accidents, while accounting for only about 20 percent of deaths for sedans. Most rollovers happen when a driver loses control of his or her vehicle, and it begins to slide sideways. When this happens, the vehicle will tip over after striking a low-lying object before the driver can regain control.

What vehicles are most likely to tip over

As part of their safety evaluations, the National Highway Traffic Safety Administration (NHTSA) tests the chances a rollover happening for each pickup and SUV on the market. These are the ten most likely to rollover:

Protect yourself and others

The best way to prevent a rollover in an SUV or pickup truck is using caution. Take turns slowly and give yourself a wide enough angle to keep all four wheels on the road. Wearing a seatbelt can greatly decrease your chances of injury or death should a rollover happen, as you’re less likely to be thrown out of the vehicle.

In the event that you or a loved one is injured in a rollover accident, speaking to an experienced Cleveland car accident attorney can be a crucial step to securing a solid claim. Contact Merriman Legal, LLC today to schedule a free, no obligation consultation.