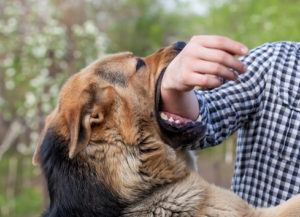 Dogs can make wonderful companions, but can also cause death, disfigurement and serious injuries when they attack. Children are especially vulnerable to injuries from being bit by dogs. But people of all ages could be hurt or killed if they are involved in an incident with an aggressive canine.

Dog owners must be aware of the risk their animals can present and can be held accountable in some situations after a dog bites. Premises liability laws and Ohio’s dog bite rules can impact when owners can be held liable for losses. When a dog bite does cause damage and the dog's owner is held responsible, homeowner's or renter's insurance usually compensates victims.

When are Ohio Dog Owners Responsible for Bite Injuries?

Ohio Revised Codes, § 955.28 provides details on the liability of dog owners after bite incidents occur. The statute says: "The owner, keeper, or harborer of a dog is liable in damages for any injury, death, or loss to person or property that is caused by the dog, unless the injury, death, or loss was caused to the person or property of an individual who, at the time, was committing or attempting to commit criminal trespass or another criminal offense other than a minor misdemeanor on the property of the owner, keeper, or harborer, or was committing or attempting to commit a criminal offense other than a minor misdemeanor against any person, or was teasing, tormenting, or abusing the dog on the owner's, keeper's, or harborer's property."

This establishes a strict liability standard. It does not matter if the dog has previously been aggressive towards people or if the owner of the dog knew of the risks the animal presented. This is different and a more strict standard than the "one-bite" rule, which is applicable in other states. Under a one-bite rule, an owner is responsible for a dog attack only if the owner is negligent or has reason to believe based on aggression and temperament that the dog is prone to biting. A strict liability standard imposes a higher degree of responsibility on dog owners and victims do not need to prove the owner did anything wrong to be compensated for losses. Ohio's law allows an owner's liability to be reduced if the victim of the bite incident provoked the dog or played a role in causing the animal to attack.

Dog owners should be responsible and take reasonable steps to ensure their animal does not attack. This means getting a dog appropriate training and socialization, preferably when the dog is a puppy, so the dog does not become fearful of people or objects.  All owners should also be sure to keep a dog leashed at all times when on public property so the animal is under the owner's control.  If an animal has shown past signs of aggression, the dog's owner should consider muzzling the dog while the animal is out in public and should warn visitors to the home of the dog's past aggression.

Dog bite victims can sustain serious losses, and may have expensive medical expenses, including costs of plastic surgery to try to recover from disfigurement a serious animal attack can cause.  Victims need to ensure they speak with an attorney about their rights under Ohio's law so they can get compensation they need to cover damages.