Higher Speeds Result in an Increase in Car Accidents in Ohio

In 2013, speed limits on many Ohio roads increased to 70 miles per hour.  Ohio is one of many states which raised their speed limit after 2011. Star Tribune reported there was a "national trend" of states raising limits, which Ohio was a part of.  Following this increase, there was another legislative push to raise speed limits even further with some lawmakers put forth a plan to increase limits to 75 MPH.

While the 75 MPH plan did not go through, the 2013 increase has been dangerous enough for Ohio motorists.  There have been an increase in car accidents since the limits raised in 2013. Wired.com reports rising car accidents due to higher speed limits is becoming a national problem as more states increase their limits and allow motorists to go faster.  Because of the added risk, Wired calls states irresponsible who make the choice to raise limits. 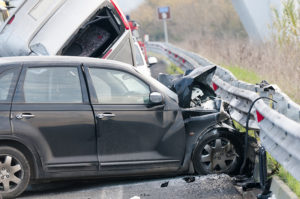 Drivers in locations like Ohio where speed limits are higher than they were in the past must be aware of the added risk which comes with going faster. Drivers need to make a commitment to drive at a safe speed in order to avoid auto accidents, regardless of the posted limit. On some roads and in some weather conditions, this can mean going slower than they are legally permitted to do.

Speeding is the number one contributing human-error cause of single vehicle automobile collisions in the United States, and is the fourth leading contributing human-error cause of multi-car collisions on U.S roads. Speeding is unquestionably dangerous, as drivers who go faster have a greater chance of losing control of their car, a longer stopping distance, and an increased chance of killing a pedestrian if they crash into someone who is walking.

Despite the risks, Ohio and other states have raised speed limits because virtually everyone goes faster than posted limits anyway. Around 50 percent of all drivers admit to regularly speeding. Further, 16 percent of motorists told AAA they didn't think speeding was a dangerous thing to do as long as the driver was a good driver who knew what he was doing.

The problem is, when speed limits rise, some people take this as a cue to go even faster. Others, who aren't comfortable driving faster, may not increase the speed at which they drive, even to the new limits which have been posted. This results in a big disparity in driver speeds, which can cause an increased crash risk. Speeding, in general, also causes an increased crash risk so these dangerous factors combine to make the roads very unsafe.

When speed limits previously rise, around 12545 fatalities and 36,583 injuries happened between 1995 and 2005 as a result. As Ohio and other states increase their limits, more unnecessary deaths will happen.