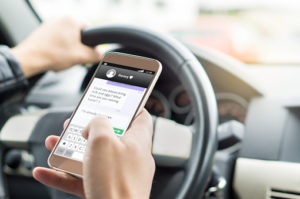 In an effort to curb the number of distracted driving accidents in Ohio, state legislators have passed a bill that would toughen existing laws.

The bill would target not just texting and driving, as stipulated in O.R.C. 4511.204, it will allow officers to issue a citation for talking o the phone while driving. An offense would cost a violator $100. However, it would not apply to those who put the phone on speaker or use a hands-free device.

As our Cleveland car accident lawyers understand, the offense would not result in any points on one's license. Still, the hope is that House Bill 95 would help deter a driving behavior that is both reckless and dangerous.

Ohio's existing distracted driving law prohibits anyone from driving a motor vehicle, streetcar or trackless trolley on any street, highway or property open to the public for vehicular traffic while using a handheld electronic communication device (i.e., a smartphone) to send, read or write any kind of text-based communication.

Those under 18 found to have violating the law will face a fine of up to $150 and a 6-month suspension for the first-time offense. A second offense will double the fine and license suspension time.

The new bill stipulates that the offense is a secondary one, meaning an officer can only cite someone for distracted driving if he or she witnesses the offense during another moving violation. Those who voted against House Bill 95 say it represents a government overreach.

This figure is more than likely an underestimate because distraction is tougher to track than, say, alcohol impairment. We can't test a driver for distraction the same way we can for alcohol. There are, of course, ways our distracted driving accident attorneys can examine fact patterns, possibly by pulling phone records, in order to make a case that the driver failed to use reasonable care, which is the duty owed other drivers.

This in turn is a form of negligence, which means you may be able to assert a claim for damages against the other driver/ insurer if you are injured as a result.