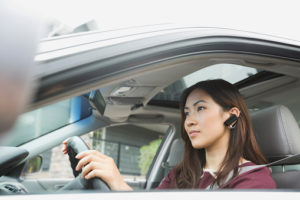 Unfortunately, this belief is simply not supported by the scientific research. Forbes notes that more than 30 studies have found hands-free devices to be no safer than handheld devices. Yet drivers still allow their driving behaviors and safety practices to be guided by an erroneous belief. This puts drivers, passengers, and all other road users in danger.

Cell Phone Use Laws in Ohio

Ohio drivers have a legal obligation to operate their vehicle with the caution of the reasonably prudent driver. Failure to do so can be considered negligence, which can lead to a finding that the driver was at fault for causing an accident. This, in turn, creates a legal obligation to compensate all accident victims for financial losses they have sustained as the result of the accident. The specific parameters of this duty of care are shaped by Ohio’s many traffic statutes.

For example, Section 4511.204 of the Ohio Revised Statutes makes it a misdemeanor to text while operating a motor vehicle on any public road in Ohio. Texting while driving can subject a driver to both a traffic citation and a civil lawsuit for negligent driving. However, another provision of the statute makes this law difficult to enforce. Subsection C prohibits officers from pulling over a driver only on suspicion of a texting offense. An officer must first witness another infraction, such as speeding or impaired driving. The driver may then be pulled over and cited for both infractions.

This makes texting while driving a “secondary offense” in Ohio. Secondary offense laws have been shown to be less effective at deterring conduct than primary offense laws. Because of this, many communities across Ohio are considering local ordinances which make texting and driving a primary offense in that municipality. The Avon City Council has already passed such an ordinance, joining Strongsville and other nearby communities in strengthening their response to the distracted driving crisis.

Ultimately, it is the responsibility of each individual driver to ensure that he or she is not distracted by any hands-free or handheld devices in the vehicle. Distraction is a violation of each driver’s legal obligation to drive with due care. This negligence can make the driver responsible for paying medical bills, lost wages, pain and suffering, and other financial losses an accident victim suffers as the result of the driver’s negligence.

Our Cleveland car accident attorneys have seen the lifelong damage that can be caused by a single distracted driver. We help injury victims assert their legal right to compensation and hold negligent drivers accountable in order to deter dangerous driving behavior in the future.