Driving when sleep deprived is just as dangerous as driving drunk 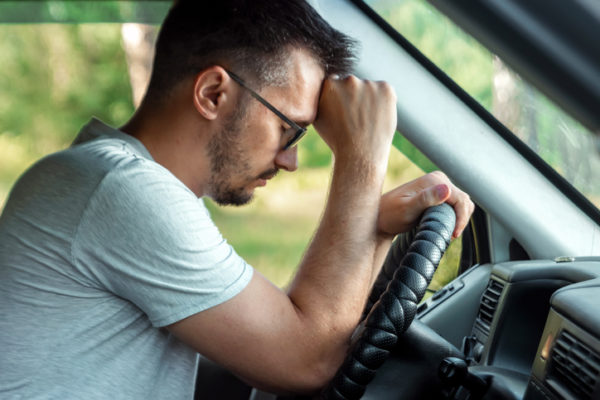 Americans haven't been getting enough sleep for some time, and the COVID-19 pandemic has only further disrupted our routines. Unfortunately, too many people view fatigued driving as just a normal part of life.

They shouldn't. Driving while tired is dangerous. In fact, going without sleep for long enough before getting behind the wheel is just as dangerous as driving drunk.

Sleep deprivation is comparable to having an illegal blood alcohol content

Going without sleep for an extended period of time impacts your driving in many of the same ways as alcohol does. Drowsy drivers have a hard time paying attention to the road and make decisions slowly. They may overlook vulnerable road users, such as pedestrians or cyclists. According to SleepFoundation.org, after going without sleep for 18 hours, you drive like someone with a blood alcohol content (BAC) of 0.05—above the legal limit for commercial drivers and beyond the point of significant impairment for any driver. Going a full 24 hours without sleep is comparable to a BAC of 0.10, well above the 0.08 threshold to be charged with driving under the influence.

The same study also found that changes in routine that disrupt the body's internal clock increase the risk of a crash, independent of the dangers of sleep deprivation per se. Disrupted routines are likely a factor in the uptick of crash rates this year since the start of the pandemic.

This is a common and growing problem on our roads

According to the Centers for Disease Control and Prevention, 1 in 25 drivers report falling asleep at the wheel at least once in the last 30 days. Drivers who fall asleep at the wheel aren't just at risk of causing crashes; the crashes they cause can be particularly deadly. Drowsy drivers may fall asleep at the wheel and crash while going at full speed, and they may not brake before impact, leading to more forceful collisions. They also commonly drift into the oncoming lane and cause head-on collisions, which can cause absolutely devastating injuries. Nationwide, the CDC estimates that drowsy drivers may cause up to 6,000 fatal crashes per year.

Lack of sleep isn't just a fact of life: it's a public health crisis, and it should be treated as such. Motorists have a legal responsibility to operate their vehicles safely, and that includes knowing when they're rested enough to drive. If you find yourself nodding off, you need to find a safe place to park and rest before getting back on the road. Trying to push through it puts everyone else on the road at risk.

Make my team your team

That's why it's so important to hold drowsy drivers accountable. We know how to investigate and find the telltale evidence that a driver may have fallen asleep at the wheel. For instance, because fatigued drivers often don't hit the brakes before impact, there may be no skid marks. They also often don't remember what happened. This becomes clear when we analyze the driver's statements and cross-reference them with witnesses and physical evidence. We put in the effort to build strong cases that get results for people harmed by drowsy drivers.

At Merriman Legal, we're proud to stand up for victims of drowsy driving and fight to keep our roads safer. We'd be honored to meet with you for a free consultation to discuss your legal rights and options.