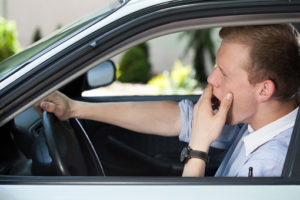 Drowsy driving is not a new problem in Cleveland, but it's one that demands more attention.

Motorists who are not vigilant can fall victim to this hazard. In some cases, the fault rests with employers (particularly transportation companies) that insist their workers put in unrealistic and unsafe hours just to ensure a delivery is made on time.

Accident victims who are injured by drowsy drivers have the right to be compensated for the driver’s negligence. Companies that push their workers too hard can be found negligent as well. Even those businesses that are relatively responsible can be found vicariously liable if the fatigued driver was acting in the course and scope of employment at the time of a collision. A Cleveland car accident attorney can help injury victims determine who is responsible for compensating their financial losses after an accident.

Why Drowsy Driving is So Dangerous

According to Waste360, drowsy driving can be just as dangerous as drunk driving. One study found that being awake for more than 20 hours or having a 30 percent decrease on a fatigue test resulted in an impairment equivalent to that of a .08 blood alcohol level. The National Sleep Foundation reports that other countries with more consistent crash reporting systems than that in the United States find that 10 to 30 percent of all traffic accidents are caused by drowsy driving.

The Toledo Blade reports drowsy driving is the leading cause of car accidents in Ohio.

The National Highway Traffic Safety Administration acknowledges the difficulties in getting accurate data on accidents caused by drowsy driving in the United States. Unlike the established clues of alcohol impairment, signs of tired driving are not always identifiable or reliable. Law enforcement officers receive less training on how to identify drowsy drivers than on how to identify drivers impaired by drugs or alcohol. Because of this, many drowsy driving crash estimates are based on a driver’s self-reporting of being tired. This is an inherently unreliable measure.

The only true method of combating fatigue is to consistently get enough rest. Drivers who work night shifts or have rotating shift schedules are likely to have interrupted sleep patterns. This makes them especially vulnerable to the effects of drowsy driving. Medical conditions such as narcolepsy or sleep apnea can also increase a driver’s risk of being fatigued. Drivers should identify and address these risk factors in order to stay safe behind the wheel.

Teens, too, may be at an increased risk for drowsy driving. Many teens face demanding school schedules, extracurricular activities, and social events at a time when their bodies are beginning to need more sleep. Teens also face the problem of school start times that are often earlier than their natural biological sleep schedules. This, too, can increase the risk of fatigue. Parents should ensure that their teen drivers know the signs of drowsy driving. Parents can also help teens establish healthy sleep patterns.