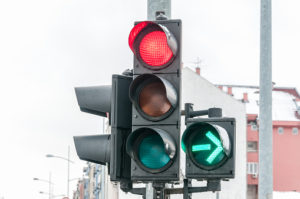 Intersections pose a notoriously high risk to motorists, no matter where they are located. One driver is trying to go left, another straight and another right. Throw in additional lanes, pedestrians, bicyclists, emergency vehicles, bus stops and more, and it's no wonder that so many serious crashes happen at intersections.

When a collision occurs at an intersection, one of the most difficult elements is ascertaining who is at fault. Ohio is a "fault state" or "tort state" when it comes to auto accident insurance. That means that when you suffer injuries as a result of a crash with another vehicle, you will have to prove fault in order to collect bodily injury coverage from their insurer or UM/UIM coverage from your own insurer. Even if you are partially at fault, you may still recover damages, but they may be proportionately reduced based on your proportion of fault, per ORC 2315.33.

In intersection collisions, a lot of factors can be at play, so sifting through the various witness accounts to get to the truth can be difficult. Photographs from the scene (including tire marks on the pavement) and video surveillance from the traffic signal or nearby business can be beneficial. Some witnesses may have even recorded a short clip of the incident on their phone.

If you or a loved one was injured in a crash at an intersection, you should speak to an experienced attorney at Merriman Legal, LLC to discuss your options in pursuing a claim.