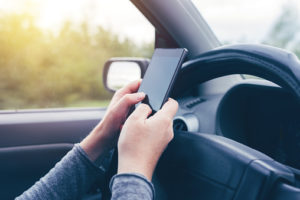 Distracted driving is everywhere. It could be the driver in the lane next to you on the highway or the driver behind you at a red light. It can result in a rear-end collision, sideswipe, head-on collision, or T-bone accident.

The term “distracted driving” is broad and often ranges in severity. For example, a driver reaching for a cup of coffee from a cup holder may be distracted for a brief few seconds. Talking on a cellphone may cause a higher degree of distraction.

Using a smartphone for any other reason than talking is considered one of the riskiest and most prevalent degrees of distracted driving, according to research conducted by the Highway Loss Data Institute (HLDI).

Handheld cellphone use is on the rise

From 2014-2018, overall cellphone use has declined but the rate of “cellphone manipulation” has increased by 57 percent. This excludes talking on a cellphone but often involves texting, checking social media, browsing the web, using apps, taking pictures, and streaming videos.

According to the Insurance Institute for Highway Safety (IIHS), about 800 traffic fatalities in 2017 were attributed to cellphone manipulation. Supporting this data, IIHS researchers garnered evidence of distracted driving at traffic lights, straight sections, and roundabouts in four communities throughout northern Virginia.

Drivers were found to be more distracted at traffic lights than roundabouts, possibly because stopping gave them the impression that they could use a smartphone safely.

Roughly 23 percent of drivers engaged in this distractive behavior, sometimes taking on multiple activities at once. These included:

Building a case against a negligent driver

When drivers’ use cellphones behind the wheel, their risk of causing a crash increases by 66 percent. Cases involving distracted driving can often be complex and require a thorough investigation. Many times, distracted drivers will deny any wrongdoing after a crash, but an experienced Cleveland auto accident attorney can subpoena records from the driver’s mobile carrier, which will tell the real story.

This evidence can be used to help you build a solid case against the driver and his or her insurance company. If you have been injured in an auto accident due to someone else’s negligent behavior, contact Merriman Legal, LLC to get started.