Home > Blog > Is it Possible to Avoid a Pileup as You Approach an Icy Intersection?

Is it Possible to Avoid a Pileup as You Approach an Icy Intersection?

A 64-year-old Cleveland woman was killed recently in a T-bone collision at an intersection, according to News Channel 9. Because intersections are places where cars come together from many different directions, there is a higher potential for crashes at intersections than for collisions to occur at other areas on the road. This is especially true during the winter months. 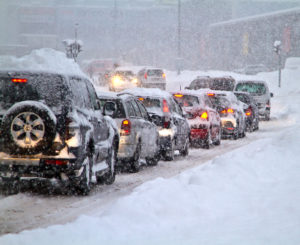 While intersection accidents can happen any time of year, the winter in Ohio is an especially high-risk time. The problem is, the risk that already exists due to the convergence of vehicles is exacerbated by the fact there could be ice on the roads and snow could affect visibility.  Motorist must be aware of this danger and try to do all they can to reduce their own crash risks. Unfortunately, sometimes it is not possible to stay safe when conditions at the intersection are particularly bad.

If a car accident happens at an intersection because of ice, there is a good chance the crash will turn into a multi-vehicle pileup. A viral video posted recently on NPR shows how this can happen.

Typically, one or more vehicles gets into a crash at an intersection because of bad road conditions and other cars cannot stop on time to avoid hitting the cars initially involved in the pileup. Ice on the road could also send drivers careening into the pileup, while lots of snow can affect visibility so drivers don't see the pileup in their path before it is too late.

If you find yourself approaching an intersection where there is a pileup, it is a very scary experience because you do not want your own vehicle to spin out of your control. You know that if you lose control of the car, you're likely to lose the ability to command your vehicle. Just like the cars that came before you, you and your vehicle have a good chance of ending up in the pile.

You can try to reduce the risk of this happening by practicing what to do in case your car skids and by preparing in case of a slide. For example, if your rear wheels begin to skid, you can turn the steering wheel in the direction you want the car to go. If your vehicle is equipped with anti-lock brakes, you can also apply steady pressure.

These efforts may not be successful in every case, but it is smart to try to head-off an accident whenever possible. Of course, as the video from NPR shows, it can be really hard to avoid an accident, even with the right kind of vehicle and knowledge of snowy driving.  You could also be at risk of other cars slamming into you. Still, understanding what to do and making safe choices could at least help to reduce the chances of a collision at an icy intersection.