Ladi Williams, a partner at Merriman Legal, has a hard-earned reputation for aggressive advocacy. Mr. Williams is a passionate and highly effective advocate for people who have suffered severe personal injury or who have been victimized by consumer fraud. Having obtained numerous successful jury verdicts and appellate decisions for his clients, Mr. Williams prides himself on utilizing unique litigation skills to obtain the best outcome for his clients.  Several of his cases have attracted national print, television, and online media coverage, and Mr. Williams has been sought out as a trusted legal contributor/commentator on a range of news stories.

Mr. Williams applies this same approach in managing the firm’s Immigration Law practice, which represents individuals, families, and companies in the area of family-based immigration, deportation defense, and employment-based immigration.

Mr. Williams has been honored with the distinction of being named an Ohio Super Lawyer® since 2014 and enjoys a 10 out of 10 (Superb) AVVO Attorney Rating, the highest rating possible. In furtherance of his client advocacy role, he is a long-standing member of the Ohio Association for Justice (OAJ) and is the immediate Past President of the Cleveland Academy of Trial Attorneys (CATA). 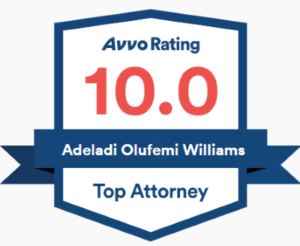 “Attorney Ladi, has truly been a pleasure to work with. Ladi, was very compassionate, honest and loyal to us during our trial. Ladi, gives great advise and, he breaks things down for your comfort if needed. Attorney Ladi, is truly a blessing. He’s very resourceful, educated and the best man ever we’ve dealt with that cared about our needs but, assured us of other outcomes as well. He also takes time to show you how important it is to thinking smart and long term. And, as long as he’s around I will continue praising him for everything he’s done to help my daughter out. Also, to the Law Firm.... you made NO MISTAKES hiring such amazing attorney like Ladi Williams.
Blessings to you!!” - Tonesha

“Ladi made this case as clear as could be. Every step of the process was explained and followed through exactly as he outlined. His professionalism and communication to me was exemplary in every way. I feel that I got a bargain when Ladi was assigned to my case.
Thank you again Ladi,” -Bob

“Ladi helped me and my husband in so many ways. he went above and beyond to help us in our immigration case. when things got complicated with husbands visa he was on top of it and he tried all possible ways to get it done. I recommend attorney lady for everyone when it comes to immigration needs.” -Dania

“I was in a car accident 4yrs ago and a friend referred me to Ladi Williams to handle my case. He has been TREMENDOUS!!! He was very diligent, honest, driven, helpful, available whenever I had questions regarding my case (And I had PLENTY!!). He stayed on top of everything to make sure I got what I deserved. He also kept the insurance company on its toes! He's truly committed to getting his client's what they truly deserve. He and his paralegal Devin were simply AMAZING throughout this whole process! I would recommend Ladi Williams a million times over! Thank you again for fighting hard for me!” - Nadia