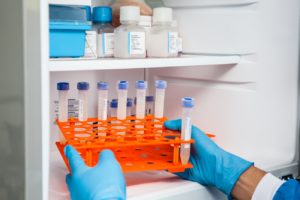 University Hospitals Ahuja Medical Center’s Reproductive and Fertility Center in Cleveland faces legal action in the wake of news that a hospital storage tank overheated, resulting in damage to more than 2,000 frozen eggs and embryos stored there.

More than 700 people who paid to have frozen eggs and embryos stored at the facility were affected by the incident. Many of the people who stored eggs and embryos there planned to have children in the future. Now, those hopes have been dashed and the investigation into why this situation happened has begun.

“What we can do is hold the hospital accountable so it never happens again,” Cleveland attorney Tom Merriman said in an interview with NBC Nightly News.

Merriman is a partner at Merriman Legal, LLC. The law firm has filed a lawsuit on behalf of many people affected by the malfunctioning frozen storage unit, according to an interview with The Washington Post. Merriman added in additional interviews with other news organizations that they want answers into how this fiasco happened in the first place.

“Who's responsible? Is it the hospital, is it some mind of vendor? Is it the manufacturer of the refrigeration system? There's a lot of different options and those kind of investigations will start now," Merriman said in an interview with ABC News 5 Cleveland.

Sometime during the weekend of March 3 and 4, the temperature in a liquid nitrogen freezer at UH’s Ahuja Medical Center - used to store the frozen eggs and embryos - started to rise, according to The Cleveland Plain Dealer on March 16.

The temperature fluctuation was due to the sudden failure of the cryopreservation tank, according to CNN. As a result, all of the frozen eggs and embryos stored inside could possibly be permanently damaged. An estimated 2,100 eggs and embryos were stored in the tank.

The storage tank has off-site monitoring and an alarm designed to alert staff members of temperature changes, according to The Cleveland Plain Dealer on March 8. The alarm was going off the morning of March 4 when staff members arrived at the hospital. No one was in the facility overnight on March 3.

On March 6, the hospital sent letters to families notifying them of the incident, according to The Cleveland Plain Dealer on March 8. Officials are still trying to determine why the temperature rose since the storage tank was plugged into the hospital’s emergency power supply, which is hooked up to a generator designed to switch on if the hospital loses power.

On March 8, University Hospitals published a statement on its website regarding the incident. The statement reads:

We are investigating a recent incident at our Fertility Clinic involving an unexpected temperature fluctuation with the tissue storage bank where eggs and embryos are stored in liquid nitrogen. At this time, we don’t yet know the viability of these eggs and embryos.

We have initiated an investigation to identify the cause of this event. We are bringing in independent experts to ensure we understand all aspects of this occurrence and do everything possible to address the situation.

Right now, our patients come first. We are incredibly sorry this happened. We are committed to getting answers and working with patients individually to address their concerns. We have already initiated contact with all of our patients to inform them and respond to their questions, and set up a designated call center to arrange personal meetings or calls with their physicians.

As always, we are guided by the principle that we are going to do the right thing by our patients and their families.

On March 13, two accreditation organizations – The College of American Pathology and The Joint Commission  – and the Ohio Department of Health announced that they were investigating University Hospitals to determine how the equipment malfunction occurred, according to The Cleveland Plain Dealer on March 13.

Kate and Jeremy Plants were one of the couples storing frozen eggs and embryos at the University Hospital’s fertility clinic. Kate was diagnosed with ovarian cancer in 2015. Soon after, she underwent fertility treatments and produced by viable embryos. “It was a miracle,” Kate Plants said in an interview with ABC News 5 Cleveland.

Then the Plants received the news earlier this month that their embryos may no longer be viable due to the unexpected temperature fluctuation in the frozen storage bank. "It hit me like a ton of bricks," Kate said in an interview with CNN. "But Jeremy took it even harder. The rest of the world looks at it as eggs and embryos, but we look at it as our future children."

Since then, the Plants and many other families affected by the hospital’s negligence have taken legal action against University Hospital. "I've talked to 20 different patients directly, and all have been told their embryos are not viable," Merriman said in an interview with CNN. "I had another 15 emails Monday morning, and phone has been ringing all day."